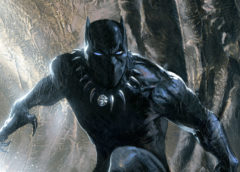 Actor Chadwick Boseman, chosen to portray the character on the big screen in the upcoming Captain America: Civil War, said in an interview with EW in December:

“There are some animal forms, but not just cat. He could be a snake, or various different styles. Obviously there’s an opportunity to do some capoeira.”

Now, I’m not sure why it’s so obvious to Boseman, but let’s speculate.

Fans of Marvel’s Black Panther comics know that he hails from the fictional African nation of Wakanda, of which he is king, defender, and spiritual leader; capoeira, on the other hand, is an Afro-Brazilian art, albeit with African roots. Involving capoeira in a film about a warrior from Africa might seem like a logical leap, or even an ignorant lumping-together of African things. From the standpoint of a filmmaker, however, it makes a lot of sense (presuming that sense was the primary motivation here and not ignorance).

Why Use Capoeira for an African Superhero?

The African martial art of Ngolo

Capoeira is known on the fringes of popular culture, and its profile grows a little more every day. It can be at once flashy and effective, with many movements having analogues in the Asian martial arts that we’re most used to seeing on screen. Given Hollywood’s kick-happy choreography, capoeira would fit in nicely while providing Black Panther with his own fighting style. Also consider that if he were to use movements strictly from the Asian stable of the arts, there would surely be accusations of white- or Asian-washing that part of the character.

What about using an African martial art? Some capoeiristas might be familiar with Ngolo, for instance, thought to be at least one of the ancestors of capoeira. With its focus on inverted positions, though, choreographing this art for a film for Western audiences sounds awfully tough; one could argue that capoeira is close enough to use in its place. There are other African martial arts, of course, but they venture even further from mere kicking and punching, towards wrestling, grappling, and the use of weapons. While these may have an influence on Black Panther’s physical repertoire, I’d still bet on capoeira being a bigger component.

Capoeira is therefore a good candidate for what the filmmakers likely want to accomplish: giving Black Panther a style that meshes with that of the other characters, yet is unique enough and evokes Africa on some level.

What Will We See?

All that being said and despite Boseman’s comment, Captain America: Civil War may end up featuring very little capoeira. A recent clip posted on YouTube by Marvel UK gives filmgoers their first glimpse at Black Panther in action. Granted this is a very short clip, and one in which Black Panther isn’t necessarily the focal point, but there are no movements unique to capoeira and a few that are usually not found in the capoeira game.

If I had to guess: Captain America: Civil War will contain a floreio or two, and maybe an aú espinha or a meia lua de compasso. This is an almost cliché pop-culture inventory that capoeiristas could recite in their sleep (and I’m sure that is the case for most other martial arts). We will see a fighting style somewhat influenced by capoeira, but something far from being able to say he does capoeira.

Fans hoping to see more capoeira on the big screen will likely have to wait for another movie to feature it. It could be Black Panther’s self-titled 2018 film.